Natalia has been living in London for couple of years now and is a great supporter of GfL. Natalia does not speak Latvian, in fact she is not even from Latvia, but she has very close Latvian friends in London. So when she heard that GfL volunteers were looking for a temporary storage space for 1 tonne of donations in kind (that is 8 cubic meters to be precise) she offered to share her garden cabin that she was not using in the winter time. It was a great relief for volunteers who spent 2 weeks collecting donated children’s toys and clothes across London, packed these and arranged for shipment to Latvia.

Shortly after the 2014 charity ball we approached crisis centres in Latvia informing them of their gift “budgets” and asking to select goods from the producers and shops in Latvia with which we cooperate. While discussing discounts on a bulk order with one of the producers, we decided to come forward with an offer to save even more money. We offered to correct spelling mistakes in the website of this particular producer in return asking for free delivery and installation (cost aggregating to EUR 80) of their goods. The producer welcomed the deal. Extra gifts were purchased for the crisis centre.

The artwork “John, Paul, Ringo and George” donated for the 2014 charity ball and auction by Latvian artist Andrejs Ritins secured its highest bid via our distance auction website. The winner was a gentleman with a surname that gave no hints as to his connections with Latvia. When the artist out of curiosity delivered the artwork to the auction winner in person, the mystery was solved. The gentleman who purchased the artwork is an entrepreneur in UK building sector. He has employed Latvian craftsmen for years and one evening when he went to a pub with his team, the Latvian craftsmen turned into sales people and talked him (as a big Beatles fan) to participate in GfL distance auction. 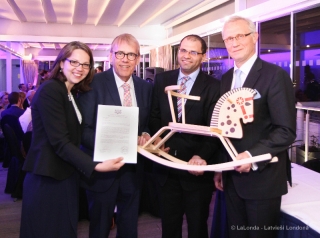 The jewel of the 2014 charity auction was a unique wooden rocking horse, gifted by the Embassy of Latvia. Traditional wooden rocking horses, manufactured in Latvia since 1956, are among the most marketable toys in Latvia and have entertained children in Latvia through many generations. In 2013 the Latvian ambassador had the honour to present such a toy to the British Royal family – Prince William and Catherine Middleton – on the occasion of the birth of their son Prince George. The Embassy gifted the exact double of the horse to our “Giving for Latvia” charity auction, together with the ambassador’s letter on its origins. The two leading bidders rather than desiring the item for themselves, sealed a deal, each of them matching each other’s bids on the condition that the special rocking horse be gifted to a crisis centre in Latvia for children to play with. (Photo: Ambassador of Latvia in UK Mr. Andris Teikmanis (far right) and winning bidders, including celebrity chef Martins Ritins (second from left)).

Comments feed for this article